His father was William Mutch [W1]

Her father was James Duncan and her mother was Isabella Robertson.

My own family line goes on through son William + Jessie Smith.

Valerie Campbell passed on the inscription from the family memorial stone in Ellon churchyard:

Details of Janet's (Jessie) marriage comes from Gordon Will who is descended from her daughter Isabella Ann Mutch.
Gordon has also provided a great deal of additional details including those of an additional three children Isabella, Alexander and Robert.
Alison Davies has provided the first link between the Scottish & English Mutches. She wrote giving details of her GGrandfather John:

John & Hellen moved south for work and left the land to work in the cotton mills. John became a gas stoker, probably in a mill and Hellen and all the children went into the mills.

My grandad, George (b 1893), went on to build his own house in Nelson and called it Darrahill, which I believe is the name of the croft where his father was brought up. I have found it on an OS map of the area.

Alison has provided photos of John and Helen, along with one of John''s gravestone in Nelson: 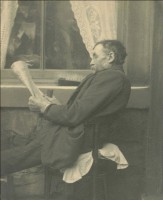 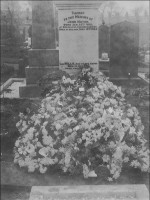 Peter Mutch Rhodes is descended from son John's son Thomas. He has provided the details about Thomas' marriage & children. He wrote:

John Mutch & Helen Grant's sixth child Thomas ,was my grandfather,and his daughter Mildred married Albert Rhodes ,hence I was named Peter Mutch Rhodes. Recently I have established contact with my mother's cousin Helen Mutch,b1924 who married an Australian in 1944 and lives in NSW. She was the daughter of John Mutch,b1888 ,who was the seventh child of John Mutch b1851.

Judith Chumley is also related to this family line. She has sent details of James death:

My own family line also goes on through James Mutch and Penelope Duncan and continues through John Mutch born 1851 and Helen Grant who were my Great Grandparents. During my initial search into the family I discovered that James died from Bronchitis, rheumatic fever and abscesses on his right elbow, knee and ankle joint. He had obviously had a hard life.His death was notified by his son Tom whose usual residence was noted at Mill of Foveran.

Joseph Mutch has contacted me to say:

I had originally shown a son James born on the same day as Janet, but Judith Chumley has corrected the record:

One thing I have discovered is that James Mutch and Penlope Duncan have gained a son who does not belong to them. James and Janet are listed as being born on the same date 8th August 1856. Janet does belong to them but James was born on that date but to a Robert Mutch and his wife Isabella Mutch nee Fraser [R10].

Kavita Kishor Rhodes contacted the site about her husband's connection to this family line:

I am married to Andrew Charles Mutch Rhodes and am tracing his family tree. He is descended from John Mutch (b. 1851) who married Ellen Grant and moved to Lancashire. John's son Thomas Mutch is my husband's great grandfather (Thomas's daughter Mildred Mutch is my husband's paternal grandmother).

Sarah Docherty contacted me to say:

Anna McCabe has done a lot of work to try and connect daughter Ann and her illigitemate child, Ann, to her family records. She contacted me and we agreed there is strong circumstancial evidence on the father which hopefully can be verified in future.

My Great Grandmother was called Annie Mutch Johnston, she was born about 1866, I have been unable to locate a birth certificate for her under Ann/Annie Johnston. On the 1901 Census it states that she was born in Foveran. I have located a birth certificate for an Ann Mutch (Illegitimate) born on 2 December 1866, at Mains of Knockhall, Foveran. Her mother is noted as Ann Mutch.

My Great Grandmother was married in Drumlithie in 1897, her marriage certificate shows her name as Annie Mutch Johnstone and that her father was Charles Johnston (Blacksmith) and Ann Mutch - both deceased.

On the 1871 Census I found an Ann Johnston born in Foveran living with a Robert/Sophia Johnston in Ellon, the Census record states that she is their 'adopted daughter', she is also living with them on the 1881 Census - noted as their niece. I have still to try and find her on the 1891 census. I managed to trace Robert Johnston's parents using his death certificate, trawling through the records I found that he had a brother Charles Johnston a blacksmith who passed away in 1868 in Mintlaw.

My Great Grandmother passed away 22 January 1941 at Aberdeen Scool(hill) Hospital, Aberdeen. Her home address was Tarbothill, Old Machar, Aberdeen, her mother is noted as Ann Mutch, no father is on the certificate.

If I am right then Ann Mutch born in 1850 would only have been about 16 when her daughter was born,the death of her father in 1867 might be the reason why her daughter went to live with her father's family - this of course is only guess work, it could also be the reason she became known as Ann Mutch Johnston the name she had on her marriage certificate. My Grandfathers middle name was Johnston.

Anna has since been busy and has now managed to confirm her link to this Family Line ...

Just wanted to give you a quick update on the ongoing quest to find my maternal Great Grandmothers family.

I mentioned on my last E mail that I had found an Ann Johnston (Mutch) being brought up by Robert/Sophia Johnston. As I previously advised Ann married my Great Grandfather John Wood in Drumlithie, in 1897.

I found Robert and Sophia Johnston on the 1891 Census living in Drumlithie, Robert was a postman. I typed in his name and a gravestone came up with the names Robert and Sophia Johnston on it, both are buried in St John the Baptist Episcopal Church in Drumlithie, the church where Ann and John were married. I live along the road from this churchyard and was in it last year and saw their stone, however, I had no idea they were related to me.

I then looked up the death certificate for Robert Johnston, he died at Mill of Uras just south of Stonehaven, the person who signed the death certificate was John Wood - nephew in law - my great grandfather. I now know that it was my Great Grandmother (Ann Mutch Johnston) who was with them and can confirm that Robert's brother Charles was my Great Great Grandfather (he died aged 21). I have now found out more about this Johnston family, and have discovered my other family members. Robert and Sophia's son Robert Cuthbert Johnston was the Episcopilian Minister at Drumlithie/Drumtochty before going to Canada with his family and setting up various missions etc there - lots of information about him on the computer.

My half sister and my 2nd cousin have both had their DNA done and we all link to the Mutch family from Foveran in the main James/Penelipy Mutch, so I am sure that my Great Grandmother Ann Mutch was the daughter of Ann Mutch, James and Penelipy's daughter.