Mutch Surname Website - Alexander Mutch
This is Family Line Reference [A27], details known for this family are ......

Her father was Alexander Brown and her mother was Margaret Conon who were married 17 June 1800 in the parish of New Deer. Details of this couple come from the entry in the booklet "Clock & Watchmakers of Aberdeen & NE Scotland 1453-1900" by D Whyte and published by the Aberdeen and North East Scotland Family History Society.

Details of the family of Alexander are taken from the 1929 Genealogy of the Mutch Family where he is listed as E3. Alexander is also said to have been a watchmaker. His parents are given as Robert + Isabel Norie.

Futher information has been supplied by Grahame Mutch who is descended from son George.

The family are shown as living at Kirktown (Eastside), New Deer in the 1841 census. Alexander's occupation is given as watchmaker and Jane, George and Elspet are listed in the household together with an Isobel aged 1.

Jim Irvine has written with details of the family of son John and Elizabeth Buchan. He wrote:

"Elspet Chrichton Mutch married Alexander Leith in 1891 and had quite a large family. Their 6th (I think) child Williamina Leith, born in 1908, was my wife's Grandmother."

I found the death registration for son Alexander Brown in Scotland's People which gave me his wife's name. Marriage and children details come from IGI and need to be verified.

Annette Ward contacted me about a Long Case clock she has with the signature Alexander Mutch, Ellon on the face. She provided these photographs: 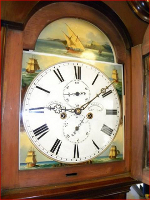 Jacqui Crighton has contacted the site with details of the family of daughter Elspet.

I have a record of the 1881 census where my great grandfather is included Charles Gordon S Crighton it says he was 3 yrs old which makes sense as he was born on 21 January 1878 in the parish of New Deer. ... There is mention of David Crighton on the 1881 census being age 7 m (which I take to mean months)...

Charles Gordon Crighton married Elizabeth Margaret Urquhart in 1903 and later died in April 1923. The S in Charles Gordon S Crighton is hard to make out on his birth certificate but found it on another site entered as Saumir."

Clive Mutch also has a Long Case clock made by Alexander Mutch, with a picture of Udny Castle on the face. He provided these photographs:

"The clock was purchased by me (at great expense) in an antique shop in Warwickshire near where I now live. The painted illustration is of Udny Castle. After over 200 years and all original it can gain or lose 2 - 3 seconds per week.

Details from the Royal Museum in Edinburgh show that son George moved to London and that he became a master clock maker, in the true sense of the word in that he employed two apprentices"