Her father was Alexander Ritchie and her mother was Helen Reid

Based on the birth date given for Peter on the chart his parents were James + Agnes Rennie.

Information on son William was provided by Colin Landsberg :

Elizabeth Livingston is related to son William. "My g/father was the son of Christina Anderson prior to her marriage to William."

She has kindly provided a genealogy list for Mutches given to her by her aunt. It is actually a list of beneficiaries of Minnie Mutch's will & gives details up to 1970.

She also sent some photographs of William, some of his family and his house: 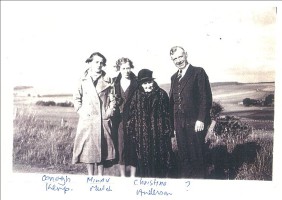 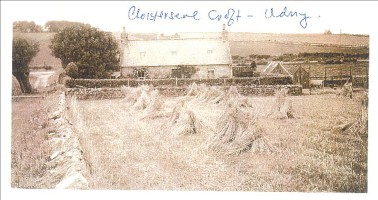 I have since found son Alexander's death registration on the Scotland's People website. The informant is his daughter Helen and it confirms his parents.

Sandra Young has provided more details on the children of son Peter, including those of her Great Grandmother Jane Elizabeth. See that entry for more details.

Peta Jenkins is directly descended from the first child of daughter Agnes Rennie. She provided the following details:

"Peter Mutch Davidson was born on the 6 December 1861. His mother was Agnes Rennie Mutch and his father noted on the birth certificate was Daniel Davidson, not present. In fact, Daniel was married to his wife Isabella Paul the very day Peter was born. We have no knowledge of what type of relationship Agnes and Daniel had, only that they produced a son.We have learnt recently that Daniel had not passed on this information to his children from his marriage to Isabella, or if he did it was kept hidden.I have a copy of Peter's birth certificate.Peter Mutch Davidson died 26 Nov 1935, Christchurch, NZ."